The space and energy sectors have met for the first time during the development of solar panels more than 60 years ago. Today, Space has a key role in monitoring greenhouse gas emissions and its climate impact. In fact, half of all Essential Climate Variables (ECVs) are measured by satellites. The recent findings on air quality changes during the COVID-19 pandemic and discussions on the identification and regulation of methane emission leaks have attracted major attention and continue to drive international and European policy initiatives.

Geostrategic considerations, the need for ensuring energy supply in times of growing energy consumption, energy price volatility, but also the increasing awareness and international commitments for climate change, have led to the creation of the most ambitious set of renewable energy targets in history. In fact, progressively building up a toolbox of policies, Europe is leading the worldwide clean energy revolution. The Green Deal further strengthened existing targets and complemented them with achieving climate neutrality by 2050 (in accordance with the Paris Climate Agreement commitments). It is a dedicated roadmap with a focus on renewable energies (especially off-shore energy), the renovation of buildings (double or triple current renovation rate of 1%), decarbonisation of transport (electrification and 1m public charging points), and increased support for R&D (35% of EU research funding should serve climate-friendly technologies).

The proportion of electricity generation from renewable sources in the EU reached a record high of nearly 35% in 2019 with a total capacity of 132 GW of solar and 205 GW of installed wind power capacities (183 GW onshore and 22 GW offshore). The increasing shares of renewables are driven by economic competitiveness, national government support to reach European 2020 renewable targets (on utility-scale as well as self-consumption level) as well as increasing numbers of distributed energy sources.

While public policies, private investments, economies of scale and consumer preferences point all in the direction of more renewable energies, the energy transition creates numerous new challenges for all stakeholders involved: an energy system fed by high shares of variable renewable energies, which themselves depend on changing weather conditions, increases the needs for flexibility and balancing on system level. At the same time, small power producers are replacing large, inflexible power stations leading to a continuous decentralisation and regionalisation of markets. Active consumers not only buy energy any more, but produce, store, and eventually sell generated energy through the network. The increasing electrification and digitalisation of households, in combination with smart-meters and home storage, offers complete new possibilities, but also challenges for existing grids which had been designed to deliver energy from A to B unidirectional and with only limited fluctuations. Smart Grids are needed to ensure storage possibilities and multi-directional flows of energy and information across the European transmission grid (with its 300 000 km of power lines and 355 cross-border lines).

With the focus on renewables and an increasing digitisation and data reliability of the energy industry, the role of space technology and satellite derived data is increasing steadily. Energy-as-a-service as well as energy-data-as-a-service are driving forces of the transformation, uniting data from multiple sources, including space. As per the global and often remote nature of the oil & gas industry, satellites have traditionally supported major energy providers in monitoring and controlling their environmental impact, ensuring communication in remote areas and providing technologies which can limit human exposure to hazards. The general monitoring of assets from offshore platforms to pipeline (see CAMEO project) is often easier and cost-efficient from space.

With the current focus on renewables, the role of space increases on single asset, company and  system level. Satellites identify most promising locations for renewables mapping solar geometry and radiation, wind speeds or water flows. The current focus on offshore renewable energy generation including ocean energy and floating wind or solar photovoltaic calls for the strategic collection of remote data such as water temperatures, waves, tidal flows, wind speeds and salinity gradients. Satellites help to limit the environmental impact of new as well as better understand the impact of existing assets on fish, bird, or sea mammals populations. 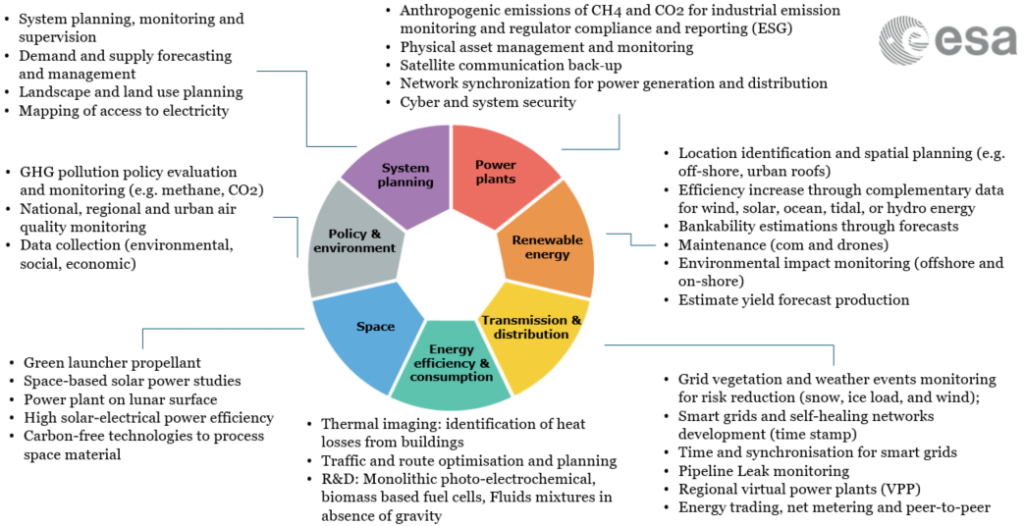 Improving energy generation and forecasts in the short- and long-term through accurate weather data is important for asset managers, banks and local authorities. By the use of real-time and historic data system planners can predict and react flexible to electricity fluctuations on the supply and demand side (generation and consumption peaks). This is especially relevant in remote areas or regions with no or limited access to relevant data and weak infrastructure.

The need for flexibility is heavily felt on grid level where ESA supports smart grids and the general resilience of power lines. Working together with Transmission System Operators and Distribution System Operators on national and European level, ESA supports the development of innovative solution to monitor grid pylon movements, vegetation across power lines, weather events impact (snow, ice load, and wind), grid conductivity and hotpots or man-made interference and constructions. Two‐way communication between smart meters and grid operators and the set-up and maintenance of virtual power plants, net-metering or peer-to-peer networks are further improving system flexibility and balancing.

Building on the progress made in the production of clean hydrogen, ESA is studying options to produce green hydrogen through water electrolysis for the Europe’s Spaceport in French Guiana for both, fuel cells feeding and liquid hydrogen (launcher propellant) production. It is planned to implement the project progressively, starting the production of green hydrogen by 2025, reducing electrical consumption and CO2 emissions while improving dependability and competitiveness.

But not only on the ground, also in space the energy transition is taking place: The International Space Station as well as satellites use solar cells to convert sunlight to electricity and a future moon base will most probably include solar power plants with regenerative systems to store energy for night survival. Feasibility studies include the sustainable use of available resources (e.g. lunar soil) and carbon free technologies to process space materials. The possibilities of re-creating an artificial environment allowing for 100% recycling of waste to produce oxygen, water and food are studied in the frame of MELiSSA (Micro-Ecological Life Support System Alternative). Sustainable and efficient off-the grid solutions are key enabler for human survival in extreme environments and long-range missions.

In the vacuum of space convection, conduction or combustion is not experienced. It is hence a unique environment to study processes related to thermal systems (and to manufacture those). Experiments carried out in the past years aboard the ISS have the potential to revolutionise cooling in electronics and data centres which are consuming approximately 2 % of all energy on earth. Also, fluids mixtures in absence of gravity (e.g. no sedimentation or phase separation) help the oil & gas industry improving their processes related to resource extraction and processing. 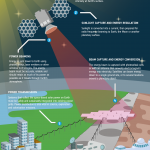 Currently, a fascinating concept is experiencing a revival: the study of Space-Based Solar Power harvesting clean energy from space. Solar power satellites benefit from higher solar illumination, unfiltered by atmospheres, and have the potential to mitigate climate change through the provision and transmission of clean energy, in a flexible way, to different remote users on earth, on the moon or on other planets. Studies have shown the potential for such systems to provide 100sMW to 100sGW of power to Earth at a build cost comparable with large terrestrial engineering projects. Benefits for European citizens, for the space sector, and for the planet could be enormous.

Space technology and the Blue Economy: a crucial integration for a greener planet

SEMiLLA: From Waste to Resource with the Application of Space Technology