All over the world there are 869 World Heritage sites and 36 are the ones in danger, dealing with challenges such as intentional attacks, collateral damages and widespread looting. Many other factors have an effect on our cultural heritage and need to be monitored in order to preserve it: natural phenomena, such as subsidence and ground motion, and anthropic ones such as urban sprawl and climate change. Earth Observation (EO) data, in this regard, can help by monitoring the degradation of sites, the level of air pollution in the surrounding areas, the coastal erosion or it can help in the discovery of heritage hidden below the ground’s surface and revealing of lost landscapes. This technology can also provide benefits in terms of risk assessment through the use of change maps, that track the changes occurring within an area of interest during a certain period, and preventive investigations for the realisation of infrastructures.

The European Space Agency (ESA) is committed in providing cutting edge space technologies to European governments and organisations through the Copernicus constellation, a fleet of Sentinel satellites managed on behalf of the European Union, and a constant flow of high resolution images and data to improve the management of the environment.

Data taken from above has been used in the past two centuries for documentation purposes and has led to several accidental discoveries of new historic sites. Today, EO data has the potential to provide enhanced cultural areas monitoring over time leveraging on several technologies and techniques: ground penetrating radars (GPR), global navigation satellite systems (GNSS), unmanned aerial vehicles (UAV), artificial intelligence, machine learning and deep learning. A multi-source integration of space-based data and in situ observations is essential in this regard to obtain high level products.

Copernicus data, with the Sentinel satellites, has facilitated a lot the maintenance of cultural heritage not only during natural disasters or conflicts, which can make sites inaccessible, but also in the daily routine, by the monitoring and mapping of the various sites. In the last few years Copernicus has also provided data in systematic time series, enabling monitoring of sites during different seasons and environmental conditions thus reducing field activities. This use of time series can provide useful information to reduce both the impact that urban activities can have on archaeological remains and structures and the impact that unforeseen findings can have on the realisation of new infrastructures. EO data can therefore support local governments in delivering better solutions for the management of the cultural heritage, resulting in savings from the maintenance activities.

The use of artificial intelligence

The use of artificial intelligence in the last few years has been applied to find new dig sites and make new discoveries, such as the historical settlements in Madagascar, the earthen mounds created by prehistoric North American populations, the archaeological mounds in Cholistan (Pakistan) and the ancient capital of Egypt Tanis. The traditional methods that archaeologists employ to discover new sites can require long time, in terms of months or years, while machine learning can reduce drastically those times. Thanks to the huge availability of high resolution images provided by satellites, planes and drones, there is less need for the archaeologists to make visits in situ in the early stages. While examining thousands of images can be a hard task for humans, artificial intelligence algorithms can scan quickly a vast amount of data to identify potential areas of interests.

The combined use of remote sensing and machine learning

Remote sensing (RS) techniques have been used in the past to detect archaeological mounds, characteristic elements of permanent and semi-permanent settlements of past cultures. The mounds are clearly visible on sedimentary plains and arid regions, due to their prominence and shape, with aerial and satellite imagery. In recent years, RS-based archaeological research has incorporated machine learning technology and algorithms to automate the detection of those sites using high resolution images (e.g. see figure 1). 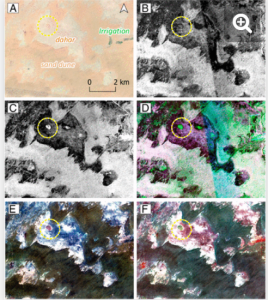 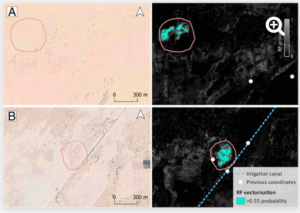 Figure 2: Visibility of RF mounds and legacy data. Google basemaps and RF probability fields showing (A) the vectorized new mound of Bokhariyanwala, closely located to multiple legacy coordinates for the same site, and (B) the vectorized new mound of Changalawa, also reported as multiple locations in legacy data probably due to the partial obliteration of the site by an irrigation canal. @Conesa et al., 2020.

As stated by the authors, only archaeological excavations can, however, provide more complete information about the occupation continuity in time of these sites. Where possible, excavation campaigns are still considered the ultimate ground truth verification.

Nevertheless, this use of combined technology is not yet largely exploited due to the large computational resources, technological expertise and amount of high quality satellite data required.

The combined use of satellite images and machine learning is opening up a new range of possibilities for the discovery of unknown cultural heritage sites, which are estimated in millions around the world, creating new opportunities for a sector that promises very strong growth in the years to come.

In order to accomplish this transition towards a space enabled archaeology, there is a need to spread the awareness of the potential for the cultural heritage sector of Copernicus data, as well as of a whole new wealth of data provided by new space assets (i.e. return on investment driven, targeted data and services provided by the private space actors). There is often a wide gap, resulting in lack of collaboration and synergies, between cultural heritage managers and experts in space technologies.

The European Space Agency, and the Downstream Gateway element in particular, will keep working on the mission to try and help bridging the gap between the space and cultural heritage sectors while providing state of the art technology and data through its Copernicus satellites.

How Earth Observation Technology can interact with startups – Interview with Pierre-Philippe Mathieu, Head of the ESA Φ-lab Explore Office